Marcin’s “adventure” with IT started about 12 years ago. First he needed to do some savings, naturally. He was mowing the lawns at the neighbors, he sold his Playstation, smashed his piggy bank, and together with his brother finally they bought a new PC. Having it less than few days Marcin damaged it, so he had to fix it before his brother came back home and noticed that the computer did not work. From that day on he was always repairing things like this and even more difficult issues with computers. That is how the “story” begins and how it continues it now?

Mladiinfo: What is your main focus within IT and what is your biggest goal for your IT career?

Marcin: I develop mobile apps and Serious Games (games which are designed for a primary purpose other than pure entertainment, like training and education, e.g. flight simulations.). I’m also a level designer, I create textures, do graphic design in 2D and 3D, worked as a Quality Assurance-software tester, and lead courses in “3D graphics – advertising design”. In my spare time, I repair computers and mobile devices.

I also have (so far) one scientific publication “Mobile music application applying technology of Augmented Reality[1]”. My main focus is mobile platforms combined with new technologies. When I first time heard about Augmented Reality, I decided I would develop a mobile application based on this technology. It was the same when I got Google Cardboard VR glasses. The beginnings are always difficult; sometimes you can get caught by very inconspicuous problems, which mean that the entire application will not work, but you can always count on the support of more experienced developers, forums and tutorials on the web. 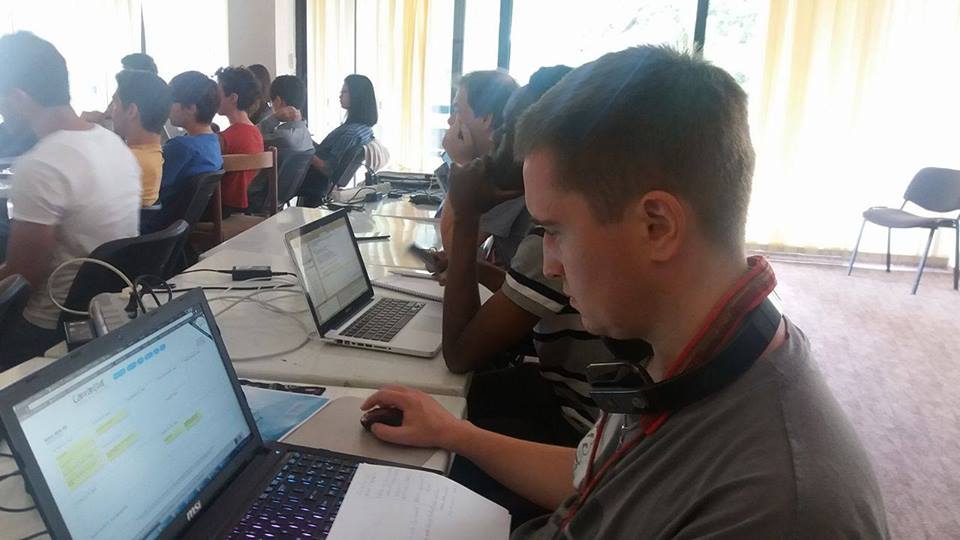 My biggest goal? I would like to be an Indie Game Developer and create a game that succeeds. It is understandable, everyone dreams of being successful, and looking at the market for mobile games and productions that has recently arisen, it is not unattainable. As a child, playing games on the NES console, I would never have imagined that in twenty years I’ll be creating my own applications – Making dreams come true, that’s probably what it’s all about.

Mladiinfo: You were one of the participants in the mYouth seminar in Macedonia. How did the training help you to develop your skills?

Marcin: At the mYouth seminar we enlarged our knowledge of Android Java Programming. I create my applications Unity, which is based on C#, the approach to application development is a bit different than in Android Studio. I learned a few new things in this regard. We also received materials from the course, which have been very useful to have at home. I do the same in the courses that I am leading. Students are not always able to remember everything, especially when dealing with something new. It is better to have a set of scientific materials after that one can consult later. Additional benefits from the course included the opportunity to improve my skills in English and to visit parts of Macedonia. I think that I’ll go back there one day. 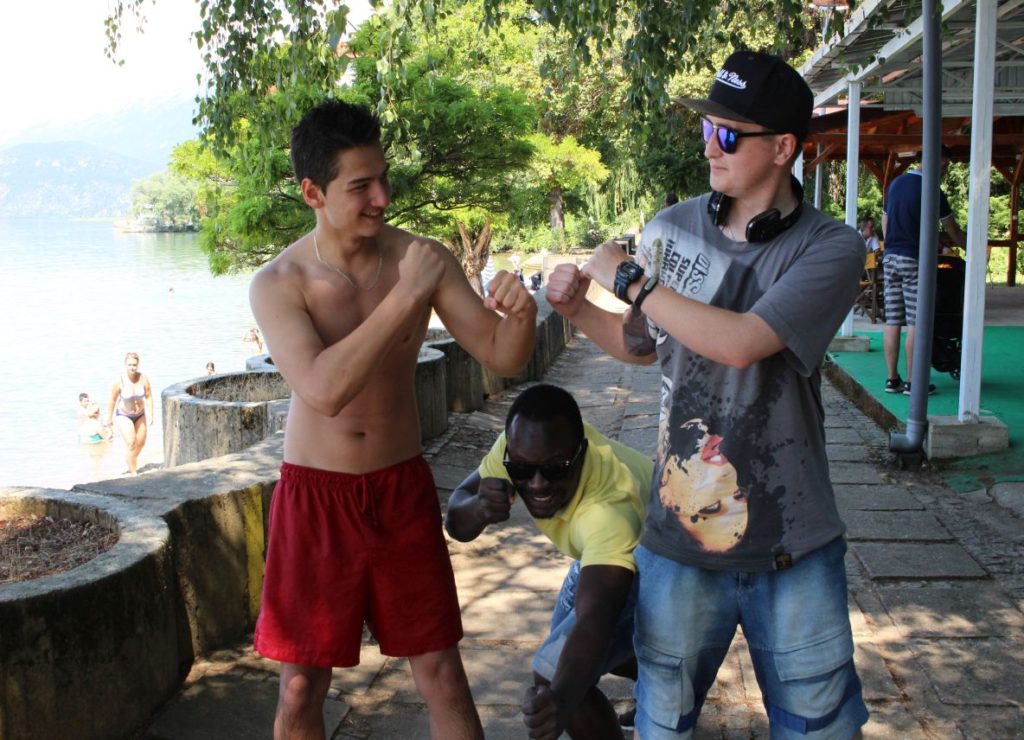 Mladiinfo: Can you tell us more about the mobile app you were working on during the myouth camp?

Marcin: Due to the fact that applications that submitted to the competition are completed, I joined an existing group led by Peter Wodzynski, Peter used to work at Terravel app, a dedicated app for travelers and hitchhikers, which allows you to write a travel diary as a blog. Normally, people describe their travels only after returning home, when they have already forgotten about many of the situations they experienced. Terravel allows you to write about your travels as they happen. The application is designed so that it does not require an Internet connection when you create entries, because travelers do not always have access to the Internet, especially as hitchhikers.

Mladiinfo: The participants of mYouth project have a chance to participate in the European Youth Award. We know that you have submitted two of your ideas, one of which has been selected for the finals. That is wonderful! What is the app about?

Marcin: The application which is in the final is AR Music Box. It’s an Augmented Realty-based musical instrument simulator – drumset and piano dedicated to people with Autism, Down Syndrome, Tourette, Asperger and other disorders.

According to statistics 1 in 1000 children born in Poland have Down Syndrome. Approximately 400,000 people are living with Down Syndrome in the United States. About 1 percent of the world´s population has an autism spectrum disorder (ASD). There are possibly 3.5 million people nationwide with an ASD. There is a kind of perceived digital divide, as some people think that people with Autism or Down syndrome are not able to use new technologies, but this is not true. They deal with them well; in fact just as well as those who don’t have such conditions. The goal of the project is to create an interactive toy dedicated to the people with this type of disorders. The toy should be a noticeable novelty for users in comparison with existing solutions, such as paper books with a speaker and buttons. It should make this tool competitive with the other solutions.

This application is intended to become a tool which supports therapy and home entertainment. Unlike the other available programs, the application does not force its user to use the display as the input element, but instead uses elements of Augmented Reality to use special paper markers as input elements. The application also forces parents to interact with their children, in contrast to other apps, which essentially offer parents a way to save time by giving a mobile device to the child to play with on its own. This application is intended to become a home entertainment tool. WATCH the VIDEO! 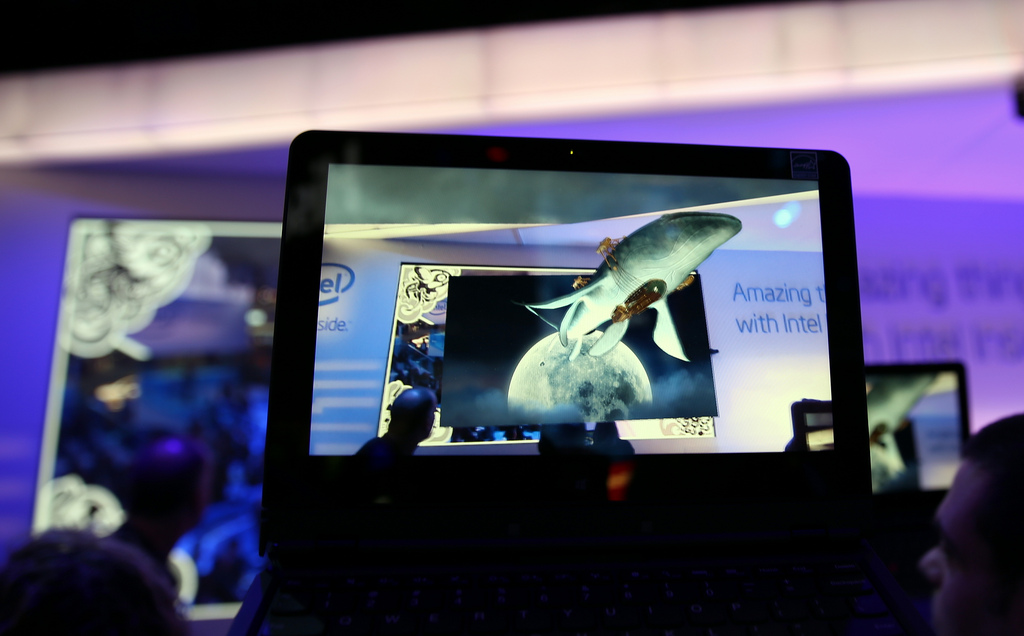 Mladiinfo: What is the main motivation for your work?

Marcin: Most motivating is the fact that people like what you do. There were a few moments when I was very proud of myself and I knew that I was doing it right. The first of these happened to me in 2013 when I showed my first self-created game to my 4-year-old cousin. It was a side-scrolling shooter. In those days, I had just started working with the Unity Game Engine, so as you can probably guess the game was not too wonderful, but the joy of this child, the fact that he could play a game created by someone from his inner circle was something priceless. He played it several times a day, and at the nursery he told his friends that his cousin creates games. This was something incredibly nice and motivating! A few months later, when I created the first working version of the AR Music Box, my other cousin visited me with her children and I showed them the application. My cousin´s son said, “Mum, uncle is a magician!”

*Marcin Szcześniak got his MSc in Computer Science at Jagiellonian University in Cracow after previously studying at the School of Economics and Law in Kielce, where he graduated with a degree in Computer Science Engineering. Currently he is a guest speaker at the Faculty of Intermedia at the Jan Matejko Academy of Fine Arts in Cracow. Marcin is a multi-tasker who likes to experiment with new technologies.