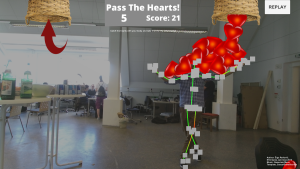 The concept of the game is to go with the spirit of passing the torch of Special Olympics, but this time it’s passing as many hearts, a motive of special Olympics, as possible in a time limit to the other basket.
The playing field is too big for just one person (certain tricks make it harder for one person) so multiple people (max 6) can participate and create a passing chain so that more hearts can pass safely.
The game is easy to learn, provides emergent gameplay opportunities and is physical in nature. Graphics can be changed to accommodate branding opportunities. 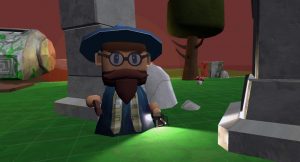 The God of Mathematics challenges the Wizard Cosinus to collect the lost crystals in the magical forgotten forest of Algebra. Help Cosinus to solve the mathematical challenges and bring the correct crystals to the shrine. 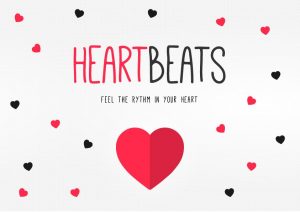 Heartbeats – Feel the rhythm in your heart is a thrilling mobile game for musically players. The correct heart rhythm must be found. Only those who tap the screen in the perfect groove will produce the rhythm of the heart.

The heart sends out positive waves when it is in time with the music. But being out of rhythm, the heart will show its dark side – little black hearts will make us sick. But life isn’t always beer and skittles, sometimes the beat changes, but with a lot of love and some sense of rhythm, it also creates 140 bpm or more.

In Funky Flatline Hans had a car accident and is severely injured.

You have to drive Hans to the hospital to save his life. Be careful to keep track of his heart beat to reanimate him. And watch out! There are some enimies which try to keep you from saving him.

FreeCom is an app letting people communicate with secure encrypted connections so no third party can observe or control data. FreeCom was primarily developed for countries having disasters, regions suffering war, or simply for places without internet access. Given that over 50% of the world population lacks the telecommunication to communicate without limitations, FreeCom offers a potent answer to common methods of oppression in the digital era, using every possible technology the smart device offers to send text messages, make calls, and broadcast news, even where no internet is available.
FreeCom’s innovative feature lets users create their own network by connecting to each other: Each person acts as a postman giving messages to either the next person until everyone is reached or to just a single targeted person, by mixing people’s physical movements with technologies to achieve connectivity.

. It gives citizens direct access to waste disposal information, which saves their time and encourage them to recycle.

Waste reduction is still a pending issue in our society. In order to face this problem, governments are promoting the use of recycling as a way to reuse materials and minimize the impact in the natural environment. Due to the large amount of components available in nowadays products, users willing to recycle often lack information about how and where to dispose the generated residues once the products have been consumed. Watch Recycl3d Final Pitch here. The app has been published in the Google Play. Simply navigate Google Play in your browser and then click install. You can also install the app directly from your device by opening the Google Play app.