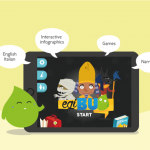 EgiBU is an educational app that allows children to learn the history and culture of ancient Egypt through games and interactive infographics. Guided by the narrator voice children have to complete levels in the game with increasing difficulty. For example, in the first level, they have to tap on the screen in order to make the Nile overflow, then to spread the Nile silt to fertilize the desert and, at the end, they have to cut the papyrus to see how the Egyptians used it. In this way, they don’t have to watch and listen to explanations because they are the protagonists of the story.